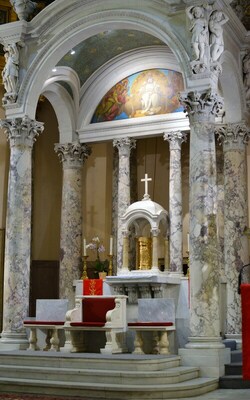 For​ over a century, St. Mary of the Lake parish has been a welcoming home for Chicagoans of all ethnicities.  From our founding by Western European parishioners we now have Latin American, African and Asian members worshiping at every service and participating in all levels of our parish.  Our neighborhood has embraced homegrown transplants from Appalachia, African Americans from the deep south, Native Americans and urban professionals from across the country.
Parish Historical Timeline
1901--The Parish on St. Mary of the Lake was established, the first Mass being celebrated on October 2nd at Horace Greeley School.  Rev. Msgr. John J. Dennison was the founding pastor and served for over half a century.
1902--The first Mass was celebrated in the temporary church.
1913--The cornerstone was laid for the current church, designed by Henry J. Schlaks.
1916--The current rectory was dedicated.  Construction also commenced for the first two floors of the current school building, which was dedicated in December.  The school is staffed by the Sisters of Mercy and dedicated laypeople.
1917--The present church was dedicated on May 20th, the cost of construction was $127,000.